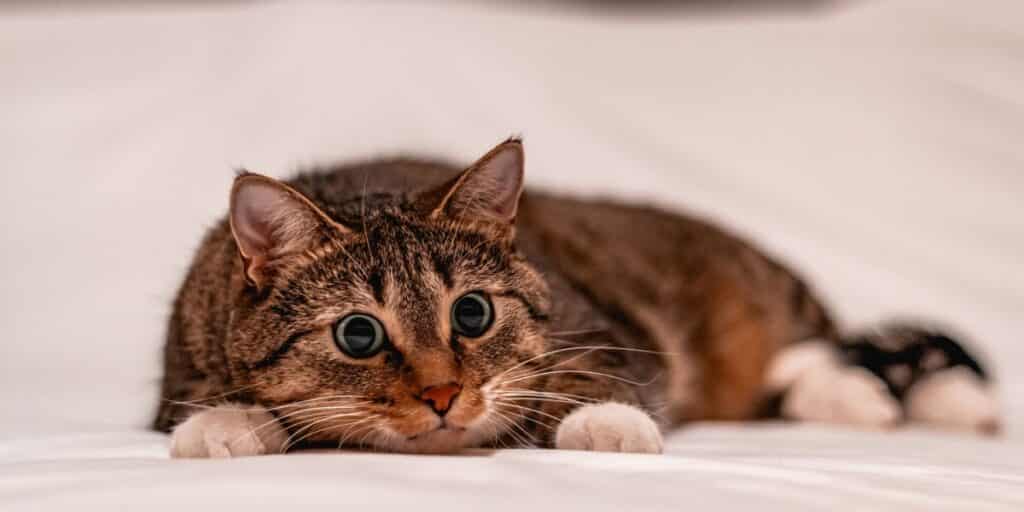 A cat’s tail is an evolutionary necessity, helping them maintain balance as they jump, run, and walk along those precarious ledges.

But there’s more to a cat’s tail than just a means to help your cat stay on the straight and narrow; it’s also a way for your cat to communicate how it’s feeling to other cats and humans.

Here’s what your cat’s different tail positions and movements mean when it comes to their mood:

In general, a cat that’s walking around with its tail held high is happier and in a better mood than one with a low tail.

If your cat approaches you with their tail held straight up – sometimes paired with a prancing walk or happy meows – they’re in a good mood and may be looking for attention.

In the wild, a cat’s survival greatly depends on its ability to remain undetected, whether it’s hunting or trying to avoid predators. Holding their tail high and being more visible means that your cat is open to attention and doesn’t feel in any danger.

And, if your cat’s raised tail is paired with a tail tip that’s curved slightly forward, they’re actively seeking interaction with you.

There is an exception to the “high tail means a happy cat” rule, and that’s if your cat’s tail is straight in the air as if they were electrocuted.

This tail position is a reflexive response to being startled or angered, and may or may not be paired with the tail puffing out, the fur along the spine raising up, or their legs stiffening.

A startled tail is designed to make your cat look bigger and more imposing in the hopes of scaring off whatever it was that took your cat by surprise.

Your cat holding their tail low or even parallel to the floor isn’t necessarily a sign that your cat is unhappy.

Generally, a horizontal tail is considered a neutral position; your cat isn’t actively seeking your attention but isn’t completely against the idea of being petted. They’re just in their natural state. Trying to interact with your cat when their tail is horizontal will, more often than not, be rebuffed.

If your cat is carrying their tail very low, almost touching the ground, this means your cat is in a mood where they don’t want to be noticed.

Opposite to the happy, high tail that gets them seen, a low-held tail means that your cat is frightened or defensive. This tail posture often is accompanied by the ears being brought forward and your cat walking around, putting itself as low to the ground as possible.

If your cat is sitting with its tail tucked neatly around its body or out of sight means your cat is quietly observing, but doesn’t want to interact with its environment.

Approach a cat sitting this way with caution.

When your cat runs around with its tail curved in an inverted U, it typically means they’re feeling defensive.

This could be the result of a real danger presenting itself, or just one of your other animals getting playful at an unwelcome time.

When your cat’s tail is gently swishing back and forth, especially if they’re asleep, this means they’re relaxed.

However, if your cat aggressively flips its tail back and forth, they are alert and focused. This could be they’ve spotted a bird outside the window or have found a toy they plan to pounce on.

A cat that’s whipping its tail back and forth – often accompanied by a thumping sound as the tail hits the floor – is irritated or excited.

This could mean that you’re on your cat’s last nerve by petting their belly, or they’re getting ready to jump on something to get a play session started.

If you see cats who are play-fighting and their thrashing tails are accompanied by bristling fur and pulled-back ears, this could be a sign that you need to gently intervene to prevent an all-out brawl.

If you own a cat, you know how much of a challenge it can be to know whether or not they’re in pain or feeling ill. At Old Farm Veterinary Hospital, we care for your cats as if they were our own, offering everything from routine exams to surgical procedures. Schedule your appointment today!